Buckingham Talks: What Build Back Better Means for You 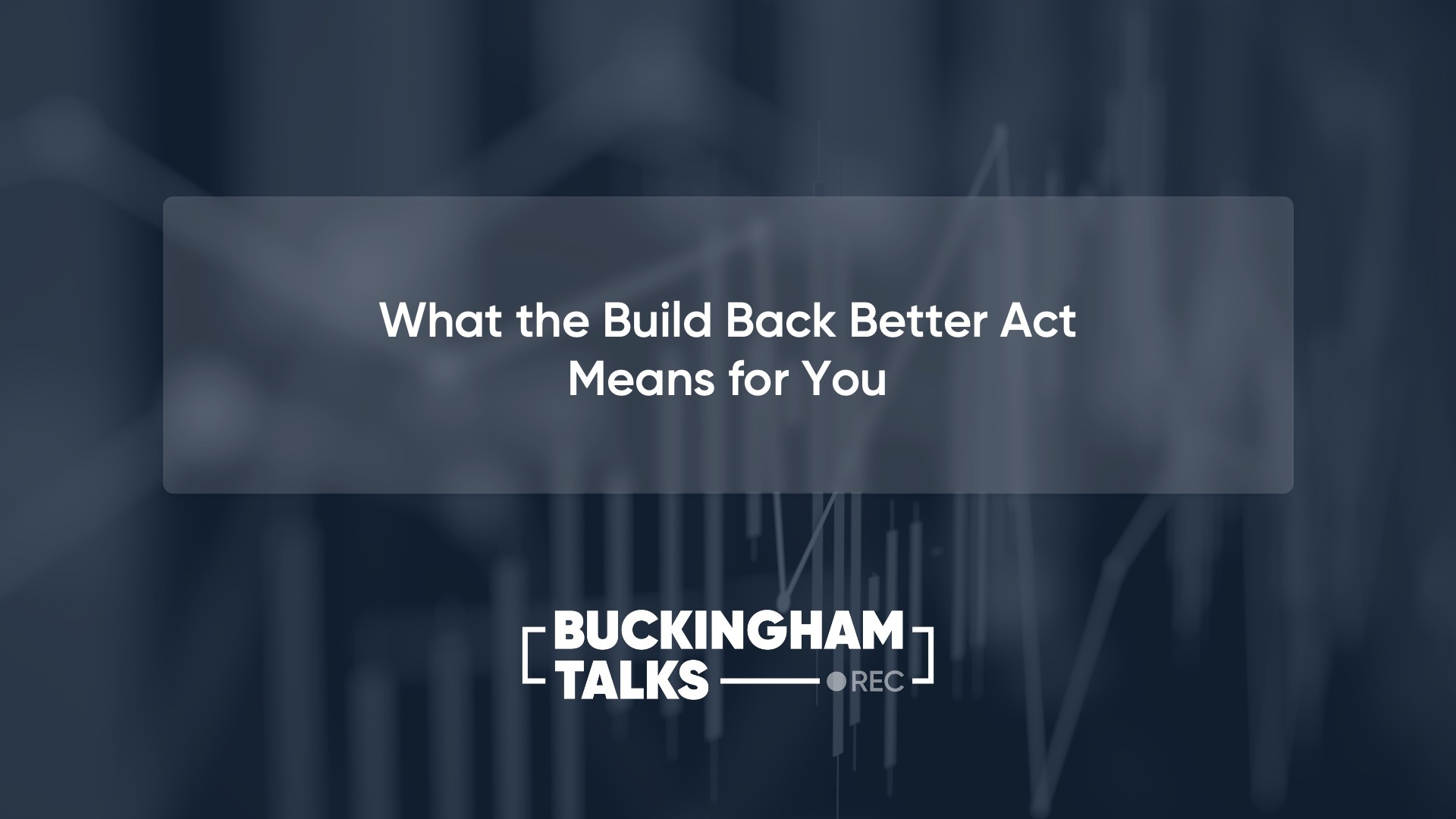 Tax legislation doesn’t often feel like such a rollercoaster ride, but the Build Back Better social spending and infrastructure bill currently before Congress has given us quite a run as provisions in it got dropped, added back, and modified in successive versions. Below is a replay of our Buckingham Talks webinar from earlier this week, as well as an update on what’s in and what’s out of the proposed legislation since we spoke about it.

The latest version of the House’s draft legislation returns none of the major revenue-related items that were stripped from its previous iteration. Thus, based on this draft, the following would continue to see NO changes for 2022:

The latest draft retains the proposed changes to:

This would be a huge win for high-but-not-astronomically-high income tax payers. A very large portion of the benefit from such a change would go to those with between $250,000 and $1 million of income annually. Many taxpayers in this group were likely preparing for a higher tax bill in 2021, but incredibly, if things largely remain as is and the SALT cap is raised as proposed, many such individuals could see a significant decrease in their tax bills through 2025 (beginning in 2026, AMT changes made by the TCJA would sunset, resulting in the loss of SALT deductions for many of these taxpayers under the AMT). That said, don’t celebrate yet. Several senators, led by Bernie Sanders, are advancing an alternative solution that would permanently remove the cap for those with less than $400,000 of income and permanently limit such deductions for those with incomes above that amount. Right now, the House proposal seems to have the widest support, but it is far from a guarantee.

Most of the retirement account-related provisions are now back in (with some adjustments to effective dates), including:

It’s anyone’s guess what’s going to happen with these retirement-related proposals. None of them have a significant impact on the revenue numbers associated with the bill, and so last-minute inclusions and/or removals don’t present the budgetary challenges that changing other aspects of the legislation would (e.g., getting rid of the surtaxes on ultra-high income). Accordingly, the prudent thing to do, at this point, is to assume that the changes will stick in the bill’s final version. The good news there, though, is that only the proposed elimination of the backdoor/mega backdoor Roth would be effective for 2022. With that in mind, if you typically use the backdoor Roth and haven’t done so already, you should talk with your advisor about making your 2021 traditional IRA contributions as soon as possible to ensure that those contributions can be converted before the end of the year (2021).

Also, thanks to a “last-minute” compromise, one month of paid family leave is now back in the bill.

In addition, the IRS has now released its retirement-account-related inflation-adjusted contribution limit updates for 2022.

The opinions expressed by featured authors are their own and may not accurately reflect those of Buckingham Strategic Wealth®. This article is for general information only and is not intended to serve as specific financial, accounting or tax advice. Individuals should speak with qualified professionals based upon their individual circumstances. The analysis contained in this article may be based upon third-party information and may become outdated or otherwise superseded without notice. Third-party information is deemed to be reliable, but its accuracy and completeness cannot be guaranteed.

By clicking on any of the links above, you acknowledge that they are solely for your convenience, and do not necessarily imply any affiliations, sponsorships, endorsements or representations whatsoever by us regarding third-party websites. We are not responsible for the content, availability or privacy policies of these sites, and shall not be responsible or liable for any information, opinions, advice, products or services available on or through them. IRN-21-2946

Clients deserve a knowledgeable advisor who is up to date on the latest changes in the laws, regulations, tools, and trends that may impact their overall financial plan. As Chief Planning Officer, Jeffrey works closely with the Buckingham team to create a seamless and enjoyable experience for clients that makes it easy to plan and instill confidence as they work towards their most important goals.
More About Jeffrey